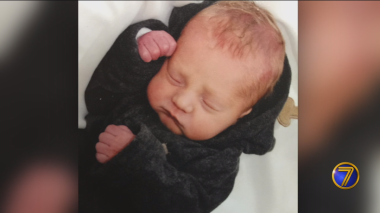 Benjamin passed away at Upstate University Hospital in Syracuse around 3:50 p.m. Saturday, where he was taken for treatment of a severe brain injury.

Jeremiah Garnett is accused of causing the child’s injuries.

Garnett was arraigned Saturday night in town of Philadelphia court. During the arraignment he asked to call his parents to tell them of the charges and his court date.

Garnett is being held at the Jefferson County Jail without bail. His preliminary hearing is scheduled for March 4 at 6 p.m. unless his case goes to a grand jury. If he is found guilty, he could face 15 years to life in prison.

Judge Jessie Scheer said he would appoint a lawyer for Garnett.

Investigators say Garnett, 23, called rescue personnel to his girlfriend’s 23 Main Street apartment (below), where he was watching the baby while she was at work.

State police say Garnett lived there with his girlfriend and Benjamin. He is not the Benjamin’s father.

Around one thirty a.m. Thursday, Garnett called 911 reporting the child wasn’t breathing and was bleeding from the nose.

From our Friday report…

“The infant was very seriously injured, was in critical condition. We determined that those injuries were criminally inflicted by Mr. Garnett who was subsequently arrested for assault,” said Senior Investigator Rick Hathaway of the state police.

“When it’s a child and you’re investigating it, of course sometimes touches nerves that other cases don’t tug on,” said Hathaway.

Medical personnel at Samaritan Medical Center, where the victim was first taken, determined he was in cardiac arrest and suffered trauma to the head. The baby was transferred to Syracuse.

Garnett was initially charged with first degree assault and endangering the welfare of a child. He was taken to Jefferson County jail on $50,000 cash bail.

Down the road from the apartment is Indian River Baptist Church.

Pastor Dan Klebes is expecting people at his church to be feeling a ripple effect the incident is causing in the community.

“When I see some of the teenagers that I’m close to that live down the street here, I’ll ask them if there’s anything they know that we can do and just be willing to offer the support that we as a church family can give,” he said.

Klebes says this should be used as a call to reach out.

“Nobody told me enough about raising kids and I’m thinking to myself right now, if we could have only found these people earlier, offered help, any kind of support,” he said.